So just as I was entering the que to drop my bags for my flight back to London (6/1/19). I was approached by a man and asked if I needed a taxi when I got back to London.  Of course I did. My usual behaviour would be to get to Heathrow then get a taxi. Often waiting up to 30mintes to 1 hour for a taxi. As i am not the only passenger on the plane. I like to try services out for myself so I gave him my name and my mobile phone number, we agreed an estimated time of completing immigration and baggage claim and off I went to check in.

I arrived in London. Immigration took less than 1 minute. I’m not sure why everyone joined a particular que. I went straight to the empty self service counter. Scanned and passed through.

When I switched on my phone, I recieved a whatsapp message from the taxi guy in Abuja confirming my taxi, the cost and the pick up point. I responded by confirming that I we had landed.

Baggage claim was now an issue. Because I check in so early my baggage is always almost the last to appear. Finally I saw one. Then I didn’t see the other for quite some time. Then i suddenly remembered the abuba eke. Maybe they had seen it on the scan. Then I went into this mental discussion with the immigration officers. Likely responses to likely questions…. then my bag appeared, intact with my abuba eke🙄

I recieved another whatsapp message confirming my car and driver details.

It went slightly pear shaped at the pick up point. Simply because the taxi driver was not waiting for me with my name on a sign as expected. So I came out and stood right in front of Coasta coffee and proceeded to call him. We located each other.

My description of this gentleman is that he was a grandpa, immigrant background with a short fuse.  I couldn’t get a coffee or water to drink as he was in a rush to get his car out of the car park so as not to incure additional cost. I felt that was totally unfair but i knew I will not die of thirst. I had to tell him twice to lower his voice and calm down. His response the second time was “i have a high voice”.

In the process of his haste, he caused a scene while waiting for the lift to the car park. I’m not sure if he has never heard of a patient dog and bone before. But as I stood in the first que we got to in the first place, grandpa had my trolley at this point and proceeded to  jump from one que to another. What a bloody sight. Any lift door that opens he will make a quick dash in an attempt to get in.  Eventually it was my turn to get in the lift, luckily he was there and we both got in.

At beginning of the journey, I recieved my last whatsapp message confirming my exact location, M4. I found this quite reassuring if nothing else, someone else knew my location.

I must say that the drive was smooth and the ride comfortable. I never felt my life flash before me due to the speed. That’s a positive. He offered me some water from his car, which I declined. Let’s just say that I have a vivid imagination. I sat quietly throughout the whole journey. He did receive a phone call which I was forced to listen to.  He had a long discussion in his mother’s tongue.

We arrived at my destination thanks to God.

The bottom line is Yes I would recommend this taxi service. It took the stress of me waiting for a taxi. 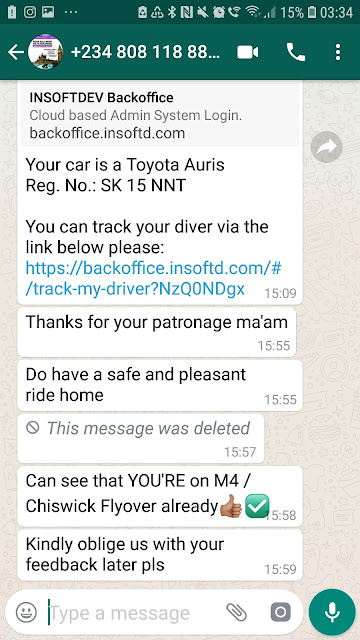